The Aboleth Longbow is a Ranger's artifact weapon. Its quality varies from uncommon to legendary with its rank.

It forms the set Aboleth with

Artifact Equipment
Rank: 60 (maximum)
With its magic purged of corruption, this weapon's aberrant power has been freed. When in hand, this weapon's eerie magic pulses and seeps through you; an ominous sense of purpose comes over you.

Relentless — Increases your Critical Strike by 2500.

Impeding Death — Enemies you attack will explode on death, doing damage to other foes.

You can only be Far-Influenced once every 30 seconds.
Ranged, Weapon
Requires Class: Ranger
Requires Level: 70
Cannot sell 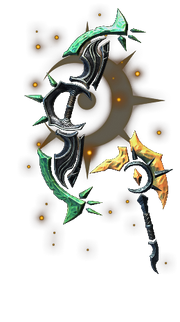