Armor Enchantment is an epic enchantment for body armor, they're ranked Lesser, Moderate, Greater, Perfect, Pure, Transcendent and Unparalleled. These are unique enchantments that fit in their own personal enchantment slot called

Armor Slot. Granting special effects and powers not covered by the standard enchantments. They're used in high level armor with a armor enchantment slot.

Shards are fragments of armor enchantments that can be upgraded into usable enchantments when you have ten of them, its recommended to use Wards preferably a

[Coalescent Ward] since it only have a 1% chance and likely lose the reagents upon failure without one. Alternatively it'll take 150x

[Preservation Ward]s if you continue to fail the 1% chance to automatically upgrade. 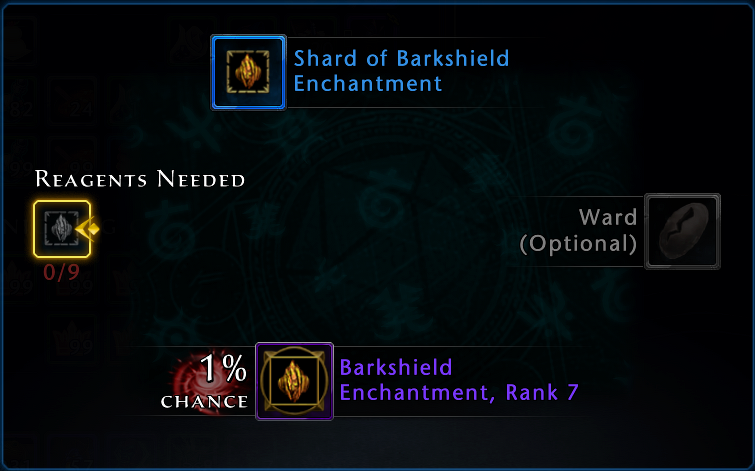 [Loamweave Enchantment] are the only Armor Enchantments without shards.

Most Shards can be obtained from the Seal Traders with the current lesser seals, while some can only be obtained from Sharandar dungeon lairs. See the item you wish to obtain for more information.

NOTE: Most of the items in this table HAVE NOT BEEN UPDATED TO THE CURRENT MODULE 11 VALUES. PLEASE DOUBLE CHECK ALL NUMBERS BEFORE BUYING SOMETHING!!!

Notes: The image is for the lesser version, higher ranks add flair to this base look