NOTE: Upgrade requirement of PS4/XBOX after M12b: Swords of Chult is not updated.

Artifacts are a new type of equipment introduced in Module 2: Shadowmantle. Each artifact offers stat bonuses, and a power that can be used in combat. Characters have one primary and three secondary artifact slots. Only the artifact in the primary slot can have its power used. The first secondary slots unlock at level 50, the next at 60, the last secondary slot at level 70, so that characters can benefit from more stat bonuses. Identical artifacts cannot be equipped simultaneously. Artifacts can be used in PvP.

Some Artifacts are part of an Artifact Set, when a character equips the matching Artifact, Artifact cloak, and Artifact belt they gain a set bonus.

Also, like companions, a character's first artifact can be obtained through a quest, "Artifact Recovery".

A character's artifacts are tracked in the collection system, and a lore entry is discovered for each acquisition.

For information on refining artifacts, see the #Ranks table.

The following are the requirements to upgrade an artifact on

The following are the requirements to upgrade an artifact on PS4/

Upgrading from rank 29 uncommon to rank 30 rare has a 90% chance of success, and requires the following reagents:

Upgrading from rank 59 rare to rank 60 epic has a 50% chance of success, and requires the following reagents:

Upgrading from rank 99 epic to rank 100 legendary has a 10% chance of success, and requires the following reagents:

Upgrading from rank 139 legendary to rank 140 mythic has a 5% chance of success, and requires the following reagents:

The following is a visual guide to refining a mythic artifact:[1] 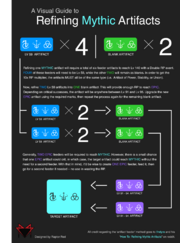