Edit
This article is a stub. You can help Neverwinter Wiki by expanding it.
Bard

The Bard is a versatile adventurer, the bard commands the power of song to be a powerful healer or a stylish combatant. Regardless of their path, it is a bard’s ability to perform that determines how far they can go. Upon reaching level 11 bards may specialize in either healing or DPS. 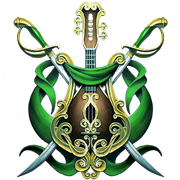 A travelling songwriter and performer; the minstrel's call to adventure is a call for new material. Not just great to have around at the tavern, the minstrel spins ballads and carols on the battlefield that revitalize and strengthen their allies. The minstrel sings ballads that can heal, cleanse, and even make their allies more durable.
Choose Minstrel to play as a healer. Healers focus on keeping their teammates alive while their team keeps the attention of the enemy.

Once you choose a paragon path, you must switch to an empty loadout, pay astral diamonds or use a retraining token to change paths. 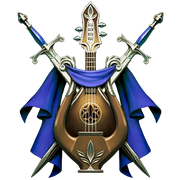 A DPS role that focuses on supplementing the groups power while performing visually stylish moves. The swashbuckling songblade is as much a master fencer as a master musician. The songblade complimeents their swordplay with a variety of magic for a fighting style as versatile as it is flamboyant.
Choose Songblade to specialize in DPS. DPS are damage dealers who focus on dispatching foes while their party members keep the enemy's attention.

Once you choose a paragon path, you must switch to an empty loadout, pay astral diamonds or use a retraining token to change paths.

A bard can enter free perform mode while not in combat and play their instrument freely. This feature is now available in all platforms and allows to play notes and chords in the scale of C Major while also performing flats and sharps.

This part of the article does not reflect any ingame benefits at all and is just intended for players who want to have fun and maybe roleplay a little bit with their friends.[]

Here is a list with some songs and how to play them with the default keybinds in the PC version of the game. This very same songs can also be played in the console versions, but using the gamepad keys instead of the keypad numbers.

To understand what you are looking at:

When The Saints Go Marching

Smoke on The Water