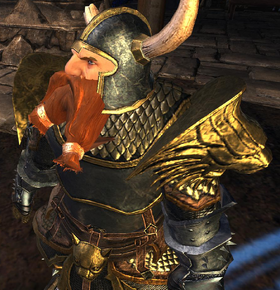 Bruenor Battlehammer is a Delzoun Dwarf who plays a central role in the Dwarven King Quest Arc. He is first encountered during the quest Chapter 5: A Lost Dwarf under the alias of Bonnego Battleaxe. Later he will accompany the player during his attempts to claim the Dwarven throne for himself.

Bruenor functions as an additional companion during the quests Chapter 5: A Lost Dwarf until Chapter 9: The Dwarven King. The player aids Bruenor in fending off intruders like Drow, Vampire Drow and Gauntlegrym Constructs while Bruenor seeks to claim Moradin's Throne.