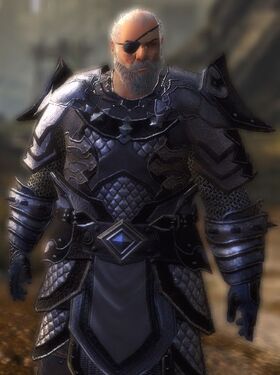 Captain Dunfield in the field

Captain Dunfield is an NPC who can be found in Helm's Hold. He is located in the Last Redoubt, nearby Brother Theodosian, the first campfire area. He can also be found in the Memorial Hills camp in Reclamation Rock

When Captain Dunfield and his soldiers were forced from Helm's Hold by the Ashmadai, they rallied at the Last Bastion, and prepared for the next battle. They spent a few days building siege engines, and marched on the City, certain that a rabble of cultists could not stand against them, even with a few devils at their command.

Tragically, they were soon proven wrong. The Ashamadai had also been preparing, and called down a horde of devils on the army. Shields broke, siege towers burned, and the few survivors were forced to retreat, leaving only a blasted battlefield behind them covered in their dead. -- The Blasted Battlefield Lore

Captain Dunfield
Helm's Hold is in ruins, and it's all my fault.

Captain Dunfield
We will not fail the people of Helm's Hold again.
Retrieved from "https://neverwinter.fandom.com/wiki/Captain_Dunfield?oldid=181175"
Categories: