Characters are defined according to a modified version of rules from the fourth edition of Dungeons and Dragons, which is also the source of the game's setting.

Every account starts with two free character slots: more can be purchased by spending Zen. The maximum number of character slots that can be unlocked on one account is 51.

Before Patch NW.5.20130923b.9, when creating a character you first had to choose between one of the three Shards. Since the patch, all characters are on the Dragon shard. 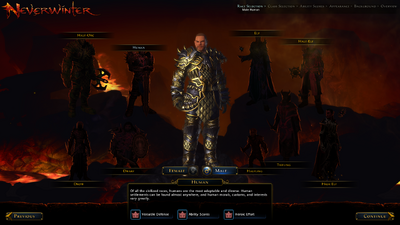 In Step I you select your Gender (Male or Female) and your Race between:

More races are to come. Note that each race gives your character different Racial Traits. 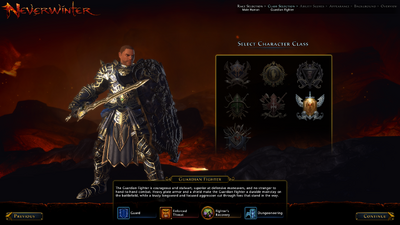 In Step II you select your Character's Class, which will determine your role as an adventurer. Currently available classes are: 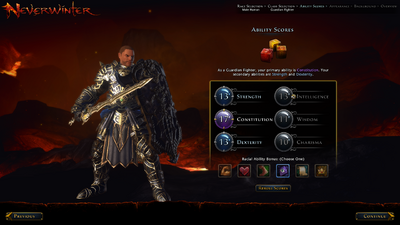 In Step III you can choose how to use your racial ability bonus.

This means adding 2 points to one of two ability scores for most races except for Humans, Dragonborn and Metallic Ancestry Dragonborn. 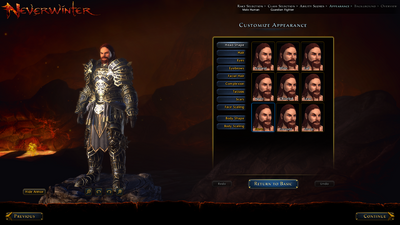 You can select from a number of presets or you can create a custom appearance by adjusting the following features (not all of the following apply to all races): Head Shape, Hair, Eyes, Eyebrows, Facial Hair, Complexion, Horns, Tattoos, Scars, Face Scaling, Body Shape, Body Scaling 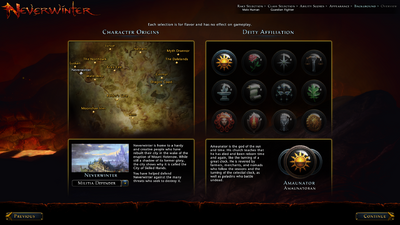 In Step V select the Character Origin and his or her Deity Affiliation: these do not affect gameplay and are only provided for flavor. 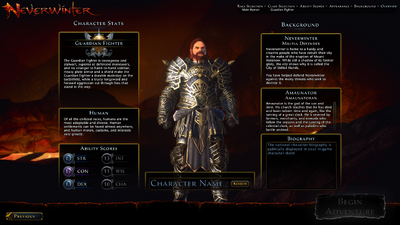 In the last step you give a name to your character. You are also allowed to add a final piece of background called Biography. By clicking Begin Adventure you reach Neverwinter Fields, which is the first tutorial zone.

Names *can* have spaces, a rarity in today's MMO's. Make good use of this and create a unique character.
Names are not unique across the Shard, but only within your account, another uniqueness feature.

You can open your Character Sheet by pressing 'C'.

In the Character Tab you see your Character and your equipped items, as well as your current Ability Scores, ratings, loadouts, and Base character.