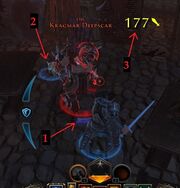 (1) - Blue indicator indicates that player is in position to do combat advantage.
(2) - An ally, a dog companion, is on the opposite side of the enemy as the player, allowing combat advantage to take effect.
(3) - The yellow number with a sword icon indicates the bonus damage the player deals.

The Combat Advantage is an attack modifier that increases amount of damage dealt vs surrounded foes.

When attacking a foe, if there is an ally attacking the same foe from the opposite direction, both players involved will have Combat Advantage, dealing bonus damage.

This is indicated by a sword icon next to the floating damage. Enemies show a blue indicator at their feet when you are in the right position.

Combat Advantage can be also granted by many powers, like: