Dragon Timers occur in any given Instance where a Heroic Encounter with a dragon is taking place. 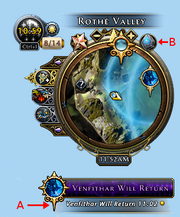 It is considered polite to ask for assistance by typing any of the following in chat;

It is rude to do the following; 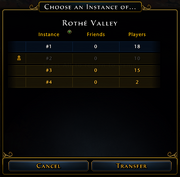 The instance you are located within can be changed using the blue jewel (B) on the upper right of the compass. This button will bring up the Instance Menu. If the instance is full, you can request a player in the instance to invite you to their party. Once inside the party click on the player portrait icon to transfer to their instance.

While there are many free apps available that will allow you to set multiple timers (stop watches) for different zones, Dragon Timers 1.1 is specifically made for this game. It is a stand alone GUI with 8 stop watch timers to audibly notify the player when a dragon is about to spawn at 3 minutes.