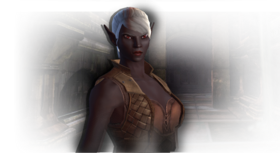 Drow are one of the playable races in Neverwinter. They were made available to all players for free with the launch of Fury of the Feywild on August 22, 2013.

Note: This racial choice is distinct from Menzoberranzan Renegade which was available at launch to those who purchased the Hero of the North Pack. If a player has this pack the option to choose between the two racial variants will be in a drop-down menu under the "Drow" portrait on the racial selection screen.

In-game: Drow are a decadent race of dark elves whose beauty and sophistication fail to mask hearts all too often stained in evil. The vast majority of dark elves base their behavior and attitudes on the worship of the chaotic evil goddess Lolth, also known as the Spider Queen.
Drow society is organized into houses. The heads of the most powerful houses occupy leadership position in the various cities of the Underdark, the subterranean realm beneath Faerûn that the dark elves call home.

Drow are the most renowned race of dark elves and are similar to their elven kin but have midnight black skin. They typically live in The Underdark in matriarchal societies serving the evil deity Lolth. Some drow reject this way of life, fleeing to the surface of Faerûn, and acting to prove not all of their race is inherently evil.

Considered traitors and outcasts by their own people, many of these drow come to Neverwinter to find acceptance and protection from what lies beneath

Physical Traits: Drow have black skin which is compared to obsidian although some have tints in the purple and blue range of the spectrum. Drow which do not have stark white hair are exceedingly rare as yellow tints are often are signs of illness or extreme old age while dark hair a shows moon elf lineage. Drow eyes are usually red but there are rare cases of yellow and purple varieties.

Origin of the Drow[]

Over 12,000 years ago, during the Fourth Crown War between the ancient elven kingdoms, the dark elven kingdom of Ilythiir turned to the worship of their ancient goddes Araushnee, now known as Lolth, the Queen of the Demonweb Pits.

The Ilythiiri's vile tactics revealed their allegiance to Lolth and her cadre of dark gods, drawing the ire of all other elven nations, The Ilythiiri are dubbed "dhaerow", or traitors, and great magic was worked against them to drive them from the surface lands.

In the Underdark, the Ilythiiri formed new cities and strongholds, and took the name "Drow" for their own. The drow have never forgotten their ancient hatred, and the vow of vengeance sworn by their ancestors is still central to drow society and their long-term goals.

Random names for drow are composed of a single name.