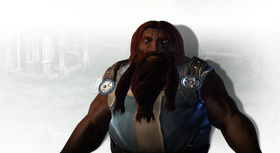 Dwarves are one of the playable races in Neverwinter and are available at launch.

In-game: "Carved from the bedrock of the universe, dwarves endured an age of servitude to giants before winning their freedom. Their mighty mountain fortress-cities testify to the power of their ancient empires. Even those who live in human cities are counted among the staunchest defenders against the darkness that threatens to engulf the world."

Dwarves are a short and stout people claiming to have been hewn from the underground rock they call home. Strong, hardy, and dependable, they have deep respect for their friends, gods, and ancestors. These pious people revere Moradin as their creator while still honoring the different gods who oversee various aspects of their lives. They make excellent fighters and clerics. They find no greater honor than standing by and protecting an ally in combat or having a beer with them.

Many dwarves can be found in Neverwinter. Some seek the glory and honor of battle, while others seek the wealth found in rebuilding the city.

Random names for dwarves are composed of a first and last name.