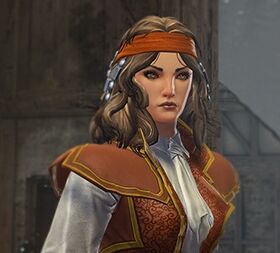 Ezmerelda d'Avenir is a NPC who can be found in the village of Barovia.

Ezmerelda was born Vistani. When she was a little girl, her family kidnapped a young man by the name of Erasmus van Richten. He was delivered into hands of a vampire, all the while screaming for mercy.

The boy's father, Rudolph, tracked down Ezmerelda's family soon after the kidnaping. They feared he would do them harm, but once he interrogated them on the whereabouts of his son, the father spared their lives. Ezmerelda was moved by his mercy.

She was also troubled about what her family had done. Years later, she ran away from home in search of the elder van Richten. Rudolph thought she was a Vistani assassin, but she convinced him she wanted to help him find his son. Alas, Erasmums was already turned into a vampire spawn, and Rudolph was forced to end his son's horrid existence.

Ezmerelda convinced Rudolph to let her train with him, and together they slew many monsters. But they had their differences and eventually parted ways.