Professions are the crafting skills in Neverwinter. Professions provide a way to make armor and/or earn currency, items, and experience. Unlocked at level 20, the profession system involves hiring Craftsmen and sending them out to perform tasks. A single craftsman for each profession can be acquired by performing a simple five-second task. These tasks take up a certain amount of time, though there is an option of spending Astral Diamonds to complete a task instantly. All of this is done through the Professions window, which is normally bound to the "N" key.

Many tasks also require Resources, which are consumable items most often collected by using Skills and Kits on various nodes throughout the world. Tools are also available which can be used to increase the chance of greater rewards, and assigning higher-quality craftsmen, or more craftsman, to a task will reduce the time required to complete the task. Both craftsmen and tools are known as Assets, neither of which are consumed when performing tasks.

Upon acquiring Level 20 Sergeant Knox will give you the quest A True Professional which directs you to the Profession Supplies Merchant in the middle of the Seven Suns Coster Market in Protector's Enclave.

A Limited Profession is one that is not available to all players or at all times. The level 20 requirement to undertake the profession is still present, and the interface is the same. These typically do not employ a full range of task levels and are only available during a specific range of dates or when certain areas of the game are unlocked.

Instead of having their own event-related profession, during certain events (Alchemical Extravaganza, Wonders of Gond) additional tasks appear in some of the regular professions or some tasks run at an accelerated rate. These are tasks related to the event. 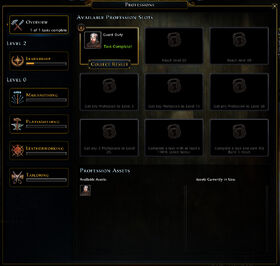 The overview tab of the Professions Window

Characters can unlock up to nine slots for performing profession tasks. The slots are arranged in 3-by-3 grid such as the following, and each is unlocked by achieving the indicated milestone:

Each profession requires Assets. Assets include both Craftsmen hired by your character and the Tools they use. Assets are distinguished from Resources in that Assets are not consumed during the course of a crafting task. The exceptions are tasks that produce better assets, essentially upgrading the assets and, in some professions, certain tasks related to increasing profession level.

NOTE: You cannot upgrade from Common to Uncommon. Only through the ranks. i.e. Assistant Platesmith will never become a Platesmith

The first craftsman for each profession can be acquired by performing the following tasks:

Note: Hiring craftsmen or upgrading them after the first is a process which takes 18 hours. Upgrading craftsmen requires 4 of the lower level which are consumed in the creation of one of the higher level.

The higher the quality of the craftsman, the less time they take to perform a given task as determined by their bonus to speed. The time taken is determined by dividing the standard time for a given task by the sum of 100% and all relevant speed bonuses. The figure to the right shows examples of results to this equation for different bonus assuming a task that normally takes eight hours.

The bonus for a given quality of craftsman is:

Tools provide a quality bonus, which increases the chances of receiving an award from a higher tier for that task. It does not necessarily mean that a task normally awarding a green item now has a chance of awarding a blue, though that may be true. It depends on what rewards are in each tier, so the quality bonus does not directly relate to item quality, though in practice this may often be the case.

The probabilities are determined as follows:

Actually creating items or performing most tasks requires various resources. These are stored in a special tab in your inventory and do not take up general inventory space.

Each profession requires the same amount of experience to increase each level:

After reaching level 25 in Alchemy, Artificing, Jewelcrafting, Leatherworking, Mailsmithing, Platesmithing, Tailoring or Weaponsmithing you can talk to The Artisan in your Guild Stronghold (Requires Guild Hall rank 10 or higher) to take a quest that will unlock new masterwork tasks.