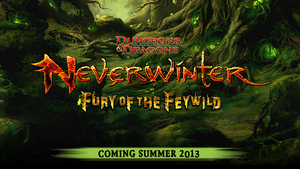 Fury of the Feywild is the first expansion to the free-to-play MMORPG Neverwinter. The expansion is set to go live on August 22nd, 2013. The expansion includes additional weapons, items, enemies, rewards, and a new explorable area, New Sharandar.

Fury of the Feywild will be a free expansion, but two purchasable packs will also be available, that give access to bonuses, mounts, a new race, and a new companion. Players will be able to join forces with the Illiyanbruen elves in a new meta-quest feature.

New items and gear will be included, inspired by the visual aesthetic of the Feywild.

Two new professions that will focus on crafting new weapons and gear.

A Drag & Drop update will allow Foundry authors to edit asset properties and place or move game assets in their quest from the 3D Preview Mode.