Greed of the Dragonflight

From Neverwinter Wiki
Jump to: navigation, search
Greed of the Dragonflight 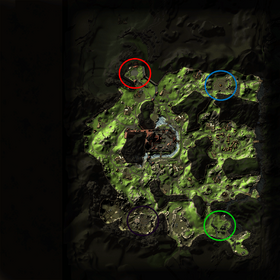 The Greed of the Dragonflight is a Guild event located in your Stronghold base.

A Travelling Wizard has made his home in the Stronghold and is offering the guild a challenge: defeat four powerful dragons that are terrorizing the surrounding region. He will offer the challenge every two hours starting from 10:30 AM PT (Pacific).

When "The Travelling Wizard" is active, there must be at least five players in the Stronghold map in order to trigger the event. This event may be triggered at any time using [Golden Bell] purchased from the Zen store.

When triggered, four dragons will land in 1 minutes. Players will have 10 minutes to defeat them, but be warned, when one dragon is slain the others will retreat after 1 minute.

All participants will receive rewards when at least one dragon is slain. Additional rewards are added on for every dragon killed.

Each dragon presents with a different challenge. Dragon Empowerer's will spawn occasionally to greatly increase the dragon's damage as long as it is alive; so be sure to eliminate them swiftly. The Red and Green Dragons are the easiest of the four, while the Black and Blue Dragons are the most difficult.

The Red Dragon, Katatheo The Proud, fires out multiple fireballs in the surrounding area. Katatheo can be found on the top left of the Stronghold map.

The Green Dragon, Oxuno The Treacherous, spews out a poisonous smog that covers the entire area inflicting constant poison damage. Oxuno can be found on the bottom right of the Stronghold map.

The Blue Dragon, Chrysos The Vain, will inflict major damage to everyone in the area if it kills its target. Chrysos can be found on the top right of the Stronghold map.

The Black Dragon, Ekdos The Cruel, has an acidic bite eats away at adventurer's damage resistance. Also, when a player dies Ekdos summons his ghostly minions from your dead body to haunt your guild members. Ekdos can be found on the bottom left of the Stronghold map.