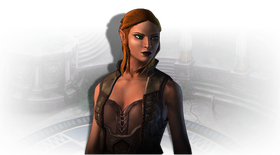 Half-elves are one of the many playable races in Neverwinter since launch.

Descendants of Human and Elf parentage, Half-Elves combine the best traits of man and elf alike. Wanderlust is common among half-elves, so many don't stay in one place too long. These half-elves tend to be natural adventurers, and half-elves are steadfast friends and excellent allies to many.

Half-elves tend to be great Clerics, as well as powerful wizards.

Random names for half-elves are composed of a first and last name, and draw from both the human and elven name pools.