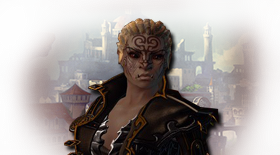 Half-Orcs are one of the playable races in Neverwinter.

A half-orc child is often viewed with shame from the Human side of its family, irrespective of how they were born. Shunned and often ridiculed, such children often grow up to be an adventurer or a brute. However it is not unheard of some fortunate half-orcs to get some direction from a mentor or a priest to lead somewhat respectable lives. Half-Orcs tend to be great Rogues, powerful Guardian Fighters, and legendary Great Weapon Fighters.

Random names for half-orcs are composed of a single name.