Edit
This article is a stub. You can help Neverwinter Wiki by expanding it.
Moon Elf 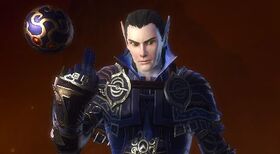 Moon Elves are one of the playable races in Neverwinter and were made available with release of Fury of the Feywild on August 22, 2013 to those who purchased the Knight of the Feywild Pack. If a player has this pack the option to choose between them and Sun Elves will be in a drop-down menu when clicking on the "High Elf Options" portrait on the racial selection screen.

In-game: "Moon elves revel in travel and exploration. Open to new experiences and honest by nature, moon elves are often seen as worthy companions by the people they meet in their travels."

Moon elves (also called silver elves) are the most common of the elven subraces. They enjoy music and travel, and are not as tied to religion or nature as their kin. Of all elves they are the most tolerant of non-elven races and can frequently be found among them as they find the diversity enlightening. This openness of course makes them less tolerated by the other types of elf.

Moon Elves have pale, sometimes blueish skin and usually black, blue, or silvery hair. Their eyes are green (or occasionally blue) with golden flecks in the iris. They prefer simple, rustic clothes but of fine materials and workmanship. Their hair is usually styled in braids or ponytails, and some favor tattoos (though a smaller percentage than found among wood elves).