The Neverwinter Epic Hero Pack is a reward pack that is given to all players upon reaching the maximum level of 60. It is received as an attachment to a mail from Lord Neverember, who congratulates the player on this achievement.

Congratulations on reaching level 60! Your continued victories have made you a hero of epic proportions!

As a reward for your heroic efforts, please accept the Epic Hero Reward Pack!

In addition to the reward you have also earned: A new Title: Epic Hero, A title used to show off your high level status. An additional Profession Slot, 1 more Profession slot for you to craft more items simultaneously.

Your adventure doesn't end here! There's plenty of epic adventure still ahead of you!

The Cults of Elemental Evil have begun spreading across the Sword Coast, leaving devastation in their wake. Team up with the beloved ranger Minsc and his miniature giant space hamster Boo to investigate this new threat. Seek out the cults' elemental beacons at the Drowned Shore, Reclamation Rock, Fiery Pit, and Spinward Rise. Confront the four Elemental Prophets and stop their spread of evil!

You also have access to new campaign content! Fight the dark fey in the realm of Sharandar. Battle the Red Wizards of Thay in the Dread Ring. Seek the treasured Black Ice in the frozen lands of Icewind Dale, including a fierce open-PvP battleground. And conclude the epic Tyranny of Dragons campaign in the Well of Dragons!

Continue to forge your legend in Neverwinter! 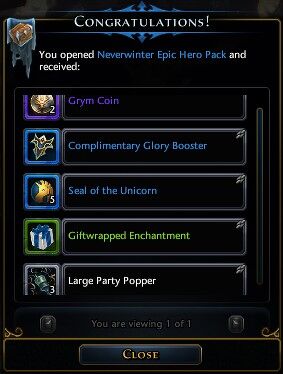