Strongholds is a PvP 20 vs 20 match available since lvl 60 that takes place in a closed instance, requiring players to queue into it.

Inside Strongholds, there are a few gameplay changes:

Unlike Domination and Gauntlgrym, Companion Active Bonuses works on Strongholds.[1]

Leaving Strongholds until the match is over, unlike Domination, is not penalized at all.

On Strongholds, players cannot use some items, like most Healing potions.

On the other hand, on Strongholds players can use some items that are unusable outside of PvP.

PvP Potions are usable while flagged for PvP only, thus available on Strongholds.

[Poking Stick] is a PvP only item.

While usable everywhere, takes effect on PvP only, including Strongholds. 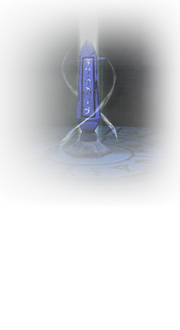 The match takes place beetween two teams of 20 players and lasts until one of them wins.

Healing Guild Hall can be done, applying [Supplies] into the Mimic.

There are 6 nodes on the map.

Every node can be captured by one of the two teams.

To start contesting the point, one must add [Supplies] into it.

To rush and capture enemy node, players have to attack it and reduce its Hit Points to zero.

Capturing is blocked when there are enemies (how many? no more than three less? times? than attacking team?) near the attacked node.

There are three lanes on the map, called top (Knight's lane), mid (Reaper lane) and bot (Dwarf lane). Each lane contains two nodes. Having captured both nodes on the lane, it is possible to build catapults on this lane and add ammo to them.

There are 2 catapults per line.

There is only 1 PvP locations available for Strongholds.

To gain a reward, player have to collect at least 200 points.

Strongholds rewards up to 500

And also when achieving 200+ points you will receive a [Strongbox of the Fallen] regardless if you win or lose with Vouchers and 2 [Banner of the Fallen].

When a match is won, once a week a [Cache of the Fallen] (containing 1 [Greater Thaumaturgic Stone] and 1 [Major Influence Voucher]) can be rewarded.

Amount of reward is lowered in case of losing, on lower levels and by some unknown conditions.