Edit
This article is a stub. You can help Neverwinter Wiki by expanding it.
Sun Elf 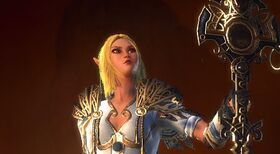 Sun Elves are one of the playable races in Neverwinter and were made available free to all players during a maintenance patch shortly after the release of Fury of the Feywild on August 22, 2013. They can be selected during character creation by clicking on the "High Elf Options" portrait, which will also generate a drop-down menu to giving the option to make a Moon Elf if the player has purchased the Knight of the Feywild Pack.

In-game: "The sun elves have lived apart from the events of the world for thousands of years. They mimic the aloof nature of their society in their personal actions as well. They are slow to smile, quick to disparage, and always ready to demonstrate their superior knowledge and skill."

Sun elves, also called gold elves, believe they are the keepers of elven culture. They are patient and are frequently devoted to tradition, learning, and religion. Many do not care for the "lesser beings" among other races, or even other elf subraces.

Sun Elves have bronze skin and hair of copper, gold, black, or occasionally red. Their eyes frequently have a "liquid" appearance and are colored green, gold, or more rarely other colors (silver, black, hazel, and copper). Their dress combines both magnificence and subtlety, often decorated with threads of precious metals.

Random names for sun elves are composed of a first and last name.