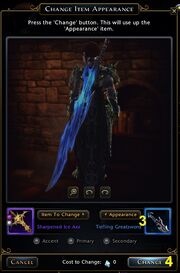 Almost all wearable gear in the game that appears visibly on a character can be Transmuted. That is to say that an option exists to Change Appearance that applies the appearance (but not stats) of one item to another.

Some items with intentionally inferior stats have been released with the sole intention of being used as the appearance source in the transmutation process. As of Patch_NW.5.20130923b.6 these are being marked with the type Free Appearance Change and do not have a cost when used to apply their appearance. Note however that this trait does not apply to the newly transmuted item: Only the original Free Appearance Change item has the discount.

Due to an unusual look, or for being a different weapon type than is normal for the class, many pieces of equipment are useful source items in the change appearance process. The following is a partial list. Most of these items are bind on equip, and so may appear on the Auction House at various times.

Note that when particularly expensive items are involved it should be carefully considered whether it would be better to actually use them rather than consume them via the transmutation process: If you regret the new look of your top-end armor it will be very costly to set things back.

The following are compilations of item images on this wiki: