The Cult of the Dragon has begun acting openly again, apparently searching for something of great value. Up and down the Sword Coast servants of this evil cult are operating, bringing widespread violence and attracting the attention of the area's protectors.
The Sword Coast is in great peril and all brave heroes are called upon to comes to its aid. From their base in Neverwinter, these heroes must assist a growing alliance to investigate the cult's activities and thwart them where they can.

The Tyranny of Dragons Campaign is a campaign, an interlocking series of unlockable quests, dungeons, tasks, and rewards introduced in Module 4: Tyranny of Dragons on August 14, 2014. Unlike previous PvE campaigns which start at level 70, this campaign can be started at level 26. 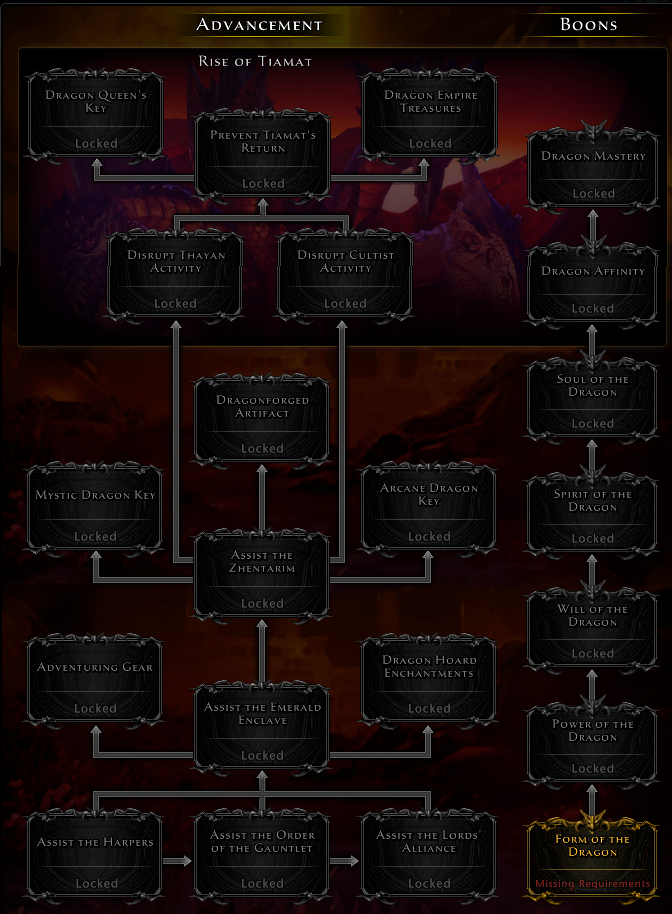 Harper Boward in Protector's Enclave offers Defeating Dragons every week, and Common Cause every day. Common Cause is a meta-quest that sends your character to a random zone among the zones that you have unlocked in the campaign, and requires you to complete the daily lair and one "standard" daily quest for that zone, and also complete the Culling the Cultists daily. Note: Lair quests are only given at level 60 or higher.

It is also possible to complete the daily heroic encounter quest and "standard" daily quest for each other zone.

Note: As of Module 5: Rise of Tiamat, there are repeatable quests in the Well of Dragons that also award

. See Well of Dragons for a complete listing.

Module 5: Rise of Tiamat extends the Tyranny of Dragons campaign. All of the tasks require character level 60.