For the Quest see The Well of Dragons.

The Well of Dragons is an adventure zone introduced in Module 5: Rise of Tiamat. It is designed for level 70 characters. Its storyline and quests are a continuation of the Tyranny of Dragons Campaign. 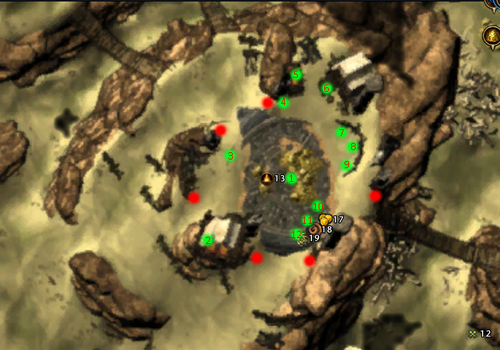 The image to the right shows the position of every NPC (marked as green) in the area. The red dots represent the elite guardians.

The daily quests are assigned in sets of three, which are indicated here by an arbitrary letter. The set given on a particular day is random.

These runs are called DR for short, start at the green dragon Volzakaris at 45 minutes after every hour in the Well of Dragons. Players start about 30 minutes after to form groups until the zone is full of runners. All runners are requested to enter a party in order to get the most out of buffs and maximize space in the zone. The most any zone can contain is 40 players but after 30 players need to be invited to the zone.

Once the run begins, the green dragon is brought down quickly and the group mounts up and moves south through the camp to the blue dragon Kradazuur. The army swarms the red dragon Hohengroth next followed by the white Glycamerax. Finally heading north the army kills the black dragon Rogrotus at which point a player known as the "caller" will choose a low population zone to transfer the army. 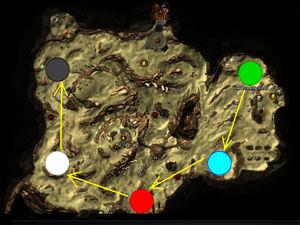 Now in the new zone the 5 dragons are still alive and ready to be killed again. Make sure you pick the zone with the LOWEST number of other players to allow as many of the 30-40 players and if you are a party leader with openings invite those asking to your party if the group is within 30-39 at the time. This time the army spawns at the campfire and head northwest to Rogrotus and follow the path in reverse to the green dragon Volzakaris. Successful runs end with a total of 10 dragons killed by all the runners. In rare cases, there is enough time to jump again and try for 11 or more Dragons. However issues do occur to prevent this from happening.

One common position among players, Control Wizards using the spell "Icy Terrain"[3], among other encounter powers[4], during the Dragon Run can cause localized lags within the instance. The cause of this is due to network server issues, such as server tick rates[5]. Icy Terrain is a massive area of effect (AoE) spell doing constant damage up to 8 seconds. It is meant for large crowds and not very effective on the dragons and can be refrained from use. There is no direct finger to point at just one cause, having 40 players in any area of the game, can and will cause an abundance of latency.

Other issues can and do arise, from no clear zone available for the jump after killing the first 5 dragons, to conflicts of confusion such as dual runs overlapping each other. The event can be chaotic at first but enjoyable and rewarding in the end.